What does NC Pre-K Enrollment mean?

During the 2018-19 school year, only about half—48%—of North Carolina’s eligible 4-year-olds from lower income families were enrolled in the NC Pre-K program.

By 2030, the goal is that 75% of eligible four-year-olds in each county will be enrolled in NC Pre-K in North Carolina. This goal is aligned with the North Carolina Early Childhood Action Plan. Currently 28 out of 100 counties have met this enrollment goal.

Why does NC Pre-K Enrollment matter?

High-quality pre-K is a foundational year that can significantly improve student readiness for kindergarten and success in school.  High quality pre-K programs, particularly NC Pre-K, provide both short- and long-term benefits to students and their communities.

Longitudinal research confirms that children who participate in NC Pre-K:

This research further confirms that these positive outcomes last through at least the 8th grade. Additional research shows long-term benefits include higher graduation rates from both high school and college, and lower rates of both incarceration and teen births.

North Carolina needs more than 17,600 more low-income 4-year-olds to participate in NC Pre-K to meet the statewide goal of 75% enrollment of eligible children in each county.

Recent funding expansions have increased the number of enrollment slots to more than 29,500, representing 48% of NC Pre-K eligible children. 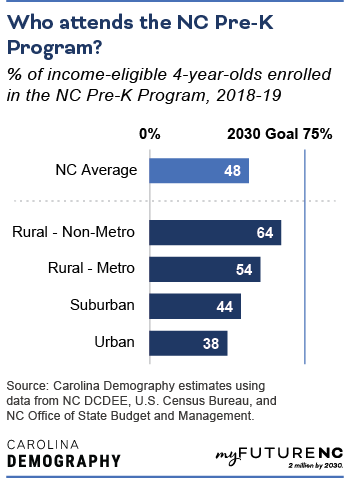 Larger percentages—and therefore numbers—of eligible children are not being served in urban areas. This is unexpected because urban areas are typically assumed to have greater access to additional resources beyond what the state provides—which covers only 60% of the cost of NC Pre-K. When compared to urban and suburban counties, rural counties have the largest variation in the share of children who are eligible but not being served. Some rural counties are doing very well, serving more than 80% of eligible 4-year-olds. At the same time, some rural counties are serving fewer than 20% of eligible 4-year-olds.

Where does the data for NC Pre-K Enrollment come from?

Data for North Carolina counties was obtained from multiple sources:

This estimate was developed for each North Carolina county through the following steps:

State values reflect the sum of all counties.

About: Duke University has been evaluating the impact of participation in the NC Pre-K program for over 15 years. Duke’s latest research, released in December 2018, found that the positive impacts from participation – increased reading and math proficiency and reduced retention and special education placements – last through at least the 8th grade. The research further found that larger positive impacts are on children from less well-educated, more economically disadvantaged, and African American families. Read the latest report.

About: The mission of the NC Early Childhood Foundation (NCECF) is to “marshal North Carolina’s great people, ideas and achievements to build a foundation of opportunity and success for every child by the end of third grade.” Among their activities, NCECF engages business, faith, law enforcement, and community leaders as early childhood champions to effectively communicate the broad societal impact of policies that affect early development and learning; NCECF leads and supports state and local collaborations – bringing together birth-through-eight health, family support, and education leaders across government, policy, private, nonprofit, philanthropic and research sectors – to advance a shared vision and course of action for maximum impact for children and families; and provides policymakers, advocates, business leaders and the public with research and analysis about the impact of federal and state birth-to-eight policy and innovations proven to achieve results for young children.

About: The NC Pre-K Program Evaluation Project at the Frank Porter Graham Child Development Institute has served as the external evaluator for the NC Pre-K Program since its inception during 2001-2002 (as More at Four). A variety of statewide evaluation studies have been conducted, including multiple studies of program services, classroom quality, and children’s outcomes during their pre-k year as well as longer-term into kindergarten and third grade.

About: The Council is charged by S.L. 2017-57, Section 7.231(a) to establish a vision and accountability measures for a birth through grade three system of early education that addresses several criteria, including standards and assessments; data-driven improvement and outcomes, including shared accountability measures; teacher and administrator preparation and effectiveness; instruction and environment; transitions and continuity; family engagement; and governance and funding.

About: To track progress toward the targets and sub-targets of the 2025 goals in the North Carolina Early Childhood Action Plan, each of the 10 goals of the plan has its own page of data and information. The dashboards are intended to promote collective insight and awareness around the data outlined in the plan. All data will be reevaluated and updated on a regular basis.