Percent of students beginning postsecondary at a North Carolina community college (2-year public institution) who complete a degree or credential from any institution within 6 years.

North Carolina’s postsecondary completion rate for students who began at a 2-year public institution was 42% in 2020, placing our state 17th among all states. In Georgia, the top-performing southern state, the 2-year public postsecondary completion rate was 50%. In South Dakota, the top-performing state overall, this rate was 68%.

By 2030, the goal is to have 45% of students who begin college at an NC community college complete a degree or credential within six years. This goal was set by the myFutureNC Commission.

Lower completion rates have costs both to individual students and the communities in which they live. Students who do not complete on time:

“experience costs in terms of receiving lower average earnings, having student debt, and losing time while enrolled in school. Additionally… students who fail to complete a college credential are less likely to go on to work in occupations that offer employment benefits (such as health insurance and pension plans), earn family-sustaining wages, or be civically involved.”

For North Carolina to meet its 2-year public completion rate goal, an additional 779 students who begin college at an NC community college need to complete a degree or credential within six years. 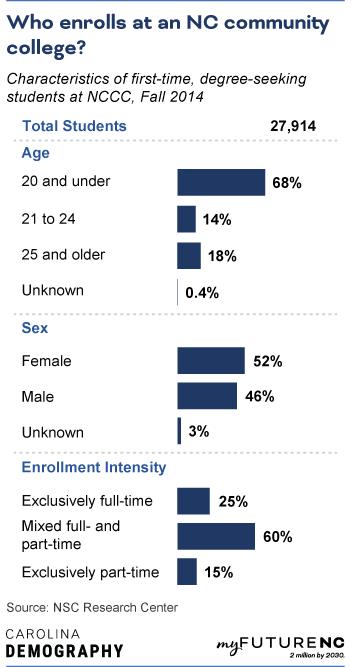 According to research from the National Student Clearinghouse, nearly 27,914 first-time, degree-seeking students began postsecondary at one of North Carolina’s 58 community colleges in fall 2014.

Nearly seven in ten of these students was a relatively recent high school graduate: 68% were age 20 or under. “Non-traditional” age students—first-time students age 25 and older—comprised eighteen percent of first-time, degree-seeking enrollments at NC community colleges in fall 2014. Fourteen percent of students were ages 21-24.

Among first-time NC community college students, female students were more common than male students: 52% versus 46%. (The sex of 3% of the fall 2014 entering cohort was unknown.)

Enrollment intensity is based on all observed enrollments between fall 2014 and June 2020 (exclusive of summer and short terms). Sixty percent of first-time NC community college students had mixed enrollments, meaning they alternated between full- and part-time enrollments. Twenty-five percent were exclusively full time and 15% were exclusively part time.

These patterns have large impacts on the 2-year public completion rate: students who enroll part time are less likely to persist in their enrollments and significantly less likely to complete a degree within six years.

Nearly two-thirds of NC community college students who were enrolled exclusively full time completed a degree or credential within six years (65%). In contrast, less than one in five students enrolled exclusively part time (19%) earned a degree within six years. The completion rate for students with mixed full- and part-time enrollments was 39%, indicating the importance of at least some full-time enrollment for timely degree completion.

Where does the data for postsecondary completion come from?

The data for completion rates by state was downloaded from the National Student Clearinghouse (NSC) Research Center.

The NSC is a nonprofit organization that provides postsecondary enrollment data and verification for more than 3,600 colleges and universities in the United States.

From NSC: “first-time-in-college degree-seeking students who started their postsecondary studies at U.S. colleges and universities in the fall of 2014.”

State-level data is not reported for states with fewer than three postsecondary institutions in a sector.

About: NC TOWER is a web-based delivery system providing aggregate information on students who attended public universities and community colleges in North Carolina. These data include programs of study, degrees attained, further enrollment, and wage and employment information.

Who is identified as a first-time student?

Does this indicator include students who may be casual course takers with no intention of earning a degree?