How is Disconnected Youth defined?

Percent of North Carolina 16-19-year-olds not in school or working (full or part time). This figure includes incarcerated youth who are not enrolled in school.

Just over one in every fourteen (7.0%) North Carolina 16-19-year-olds was not in school or working in 2018, placing our state 31st among all states for disconnected youth. In Virginia, the southern state with the lowest levels of youth disconnection, this rate was 4.8%. Minnesota had the lowest rate of disconnected youth of any state nationwide (3.0%).

MyFutureNC is working with NC Commerce and the NC Works Commission to establish a 2030 goal for this indicator.

Why does Disconnected Youth matter?

Ages 16-19 represent a critical period in the transition to adulthood—higher rates of disconnection suggest these young adults are cut off from critical social supports and experiences that can help them build a path to the future.

Measure for America, a project from the Social Science Research Council, notes that disconnected youth are “cut off from the people, institutions, and experiences that would otherwise help them develop the knowledge, skills, maturity, and sense of purpose required to live rewarding lives as adults. And the negative effects of youth disconnection ricochet across the economy, the social sector, the criminal justice system, and the political landscape, affecting us all.”

Unemployment and a lack of educational attainment is also linked to depression, anxiety, and isolation. The limited education, lack of work experience, minimal professional networks, and social exclusion of disconnected youth have consequences into adulthood and may affect earnings and self-sufficiency, physical and mental health, and relationship quality and family formation. 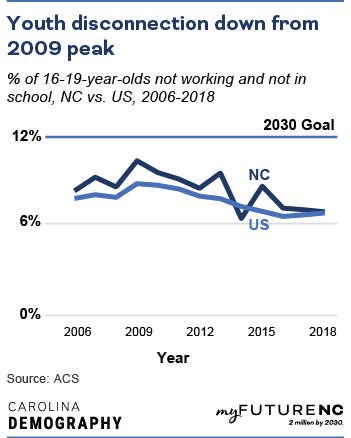 American Indian youth had the highest rates of disconnection—14.8%—meaning they were least likely to be in school or working. Hispanic (10.3%), Asian (7.2%), and multiracial (7.1%) youth all had disconnection rates above the state average. White (6.0%) and black (6.8%) teens age 16-19 were the only groups to fall below the state average.

Where does the data for disconnected youth come from?

The U.S. Census Bureau’s American Community Survey (ACS). This annual survey of demographic, economic, and social characteristics has been collected for all households and group quarters populations since 2006. The Public Use Microdata Series (PUMS) contains anonymized person-level observations that enable custom tabulations of the data for the state and some counties. Data for all counties is available in the 5-Year ACS in Table B14005: Sex by School Enrollment by Educational Attainment by Employment Status for the Population 16 to 19 Years.

All residents of North Carolina ages 16-19.

Are individuals who are incarcerated classified as disconnected youth?

Individuals who are incarcerated and are not reported as being enrolled in school or working will be identified as disconnected youth.