COVID-19 is currently affecting updates to this indicator

This indicator uses data from the 1-year American Community Survey (ACS) data. The COVID-19 pandemic severely affected the data quality of the 2020 ACS. The Census Bureau recommends against using the ACS data from 2020. You can read more about how COVID-19 affected ACS data in this press release.

What does Postsecondary Enrollment Rate mean?

Percent of 18-24-year-olds enrolled in college or graduate school.

By 2030, the goal is to have 47% of North Carolina 18-24-year-olds enrolled in college or graduate school. This goal was set by the myFutureNC Commission.

Why does Postsecondary Enrollment Rate matter? 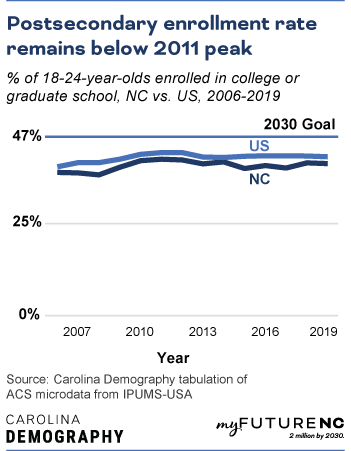 Where does the data for the postsecondary enrollment rate come from?

The U.S. Census Bureau’s American Community Survey (ACS). This annual survey of demographic, economic, and social characteristics has been collected for all households and group quarters populations since 2006. The Public Use Microdata Series (PUMS) contains anonymized person-level observations that enable custom tabulations of the data for the state and some counties. Data for all counties is available in the 5-Year ACS in Table B14004: Sex by College or Graduate School Enrollment by Type of School by Age for the Population 15 Years and Over.

Carolina Demography calculated the statewide postsecondary enrollment rate using ACS PUMS data retrieved from IPUMS-USA. Individuals were identified as being enrolled in college or graduate school if they reported being enrolled in school and specified one of the following enrollments during the last three months:

All residents of North Carolina ages 18-24.

About: GEAR UP NC partners with the College Foundation of North Carolina, ACT Inc., the North Carolina Department of Public Instruction, and the State Education Assistance Authority for statewide dissemination of college information. GEAR UP NC is included in the University of North Carolina System Higher Expectations Strategic Plan as a strategy for promoting and improving access to higher education in North Carolina.

Does the indicator reflect full-time or part-time enrollment?

The postsecondary enrollment rate includes all enrollments, both full-time and part-time.