* Demographic group segmentation not available for this indicator

What does First-Year Persistence Rate mean?

Percent of first-year students beginning postsecondary at a North Carolina institution who are still enrolled in any postsecondary program one year later.

The persistence rate is a more complete metric of whether students are continuing their postsecondary enrollments than the retention rate, which measures the share of students who are enrolled at the same postsecondary institution one year later.

By 2030, the goal is to have 80% of North Carolina’s first-year undergraduate students persist to their second year. This goal was set by the myFutureNC Commission.

Why does First-Year Persistence Rate matter?

Persistence to degree completion is a challenge for both individual students and the institutions they are attending, and overall patterns of persistence and retention can amplify and exacerbate inequalities shown in college access. 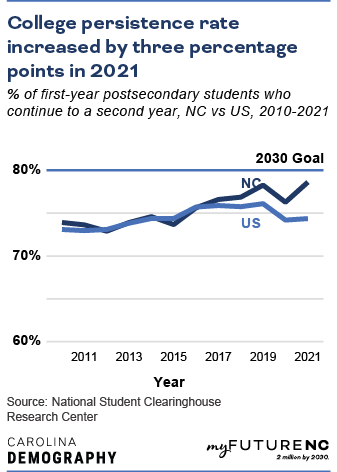 There are well-documented differences in student persistence and retention by: 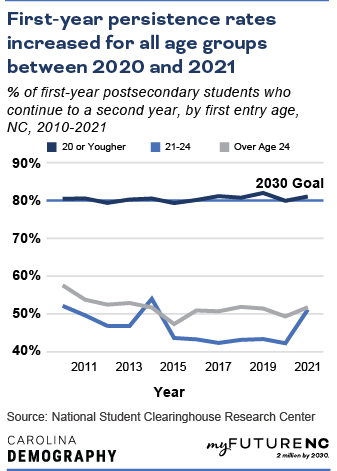 These characteristics are often interrelated. For example, economic disadvantage is associated with lower academic readiness and such students are more likely to enroll part-time or at less selective institutions. These students may be more likely to face academic or financial challenges during their first year, resulting in lower overall persistence.

Research on the first-year persistence rates of North Carolina high school graduates is consistent with past research using national samples. Overall persistence was higher among:

Where does the data for the First-Year Persistence Rate come from?

The data for first-year persistence by state was downloaded from the National Student Clearinghouse (NSC) Research Center.

The NSC is a nonprofit organization that provides postsecondary enrollment data and verification for more than 3,750 colleges and universities in the United States.

The first-year persistence rate is limited to first-time fall enrollments. First-time means that students were not previously enrolled in college and had not previously completed a degree or a certificate. Former dual enrollment students are included if “their enrollment or degree record prior to the entering cohort year was before the student turned 18 years old.” Fall enrollment means an enrollment term that began between August 1 and October 31.

Former dual enrollment students will be excluded if their enrollment or degree record prior to the entering cohort year was after they turned 18 years old.

Students who begin postsecondary before August 1 or after October 31 are excluded from the analysis.

What is the difference between retention rates and persistence rates?

Retention and persistence are both metrics that capture a student’s progress through postsecondary:

Because retention rates are limited to progress within the same initial institution, they are lower than persistence rates.