COVID-19 is currently affecting updates to this indicator

This indicator uses data from the 1-year American Community Survey (ACS) data. The COVID-19 pandemic severely affected the data quality of the 2020 ACS. The Census Bureau recommends against using the ACS data from 2020. You can read more about how COVID-19 affected ACS data in this press release.

Percent of North Carolina 35-44-year-olds earning a living wage. A living wage is defined as earning a family income equivalent to 300% or more of the federal poverty line.

Slightly more than half—54%—of North Carolina’s mid-career adults (35-44) had a family income greater than 300% of the federal poverty line in 2019. This proportion was 66% in Virginia, the top-performing southern state. In Texas and Georgia—two southern states with similar costs of living to North Carolina—the share of adults earning a family-sustaining wage in 2019 was comparable to our state: 56% in Texas and 55% in Georgia. On average, Southern states have lower living wage values than other states while the poverty line is the same value everywhere in the United States. This means that 300% of the federal poverty line means something very different in North Carolina than it does in New York or California.

A family-sustaining or “living wage” is defined by the MIT Living Wage Calculator as earning enough to cover necessary expenses—such as food, medical care, childcare, housing, and transportation—without having to rely on financial assistance from other sources.

An increase in the percent of North Carolina 35-44-year-olds earning a living wage may indicate: 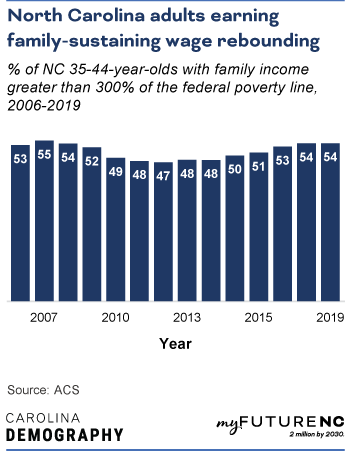 The share of North Carolina adults ages 35-44 earning a family-sustaining wage peaked in 2007 at 55%, just before the Great Recession. This proportion steadily declined, dropping below half of adults in 2010 and reaching its low point in 2012 at 47%. This proportion increased to 54% in 2019 but has not yet fully recovered to pre-recession levels.

Where does the data for family-sustaining wage come from?

A family-sustaining wage or living wage is the income needed for a family to cover minimum necessary expenses, such as food, childcare, healthcare, housing, and transportation, in a given area. The Massachusetts Institute of Technology’s (MIT) Living Wage Calculator provides data on the hourly living wages for states, metropolitan areas, and counties. The MIT Living Wage Calculator values have been adjusted to reflect family size, household composition, number of earners, and local cost of living. This model assumes that all working adults in the household are employed full time (2,080 hours per year) and does not account for non-essential purchases or savings and investments.

Family-sustaining wages in North Carolina range from $11.79 per hour for one working adult living alone to $34.34 per hour for one working adult supporting three children. When compared to poverty wages—the hourly wages associated with the poverty threshold set by the U.S. Department of Health and Human Services—the living wage values for North Carolina are between 200% to 300% of the poverty wage, depending on family type. Across all family types, the average living wage rate is 240% of the poverty wage. Based on these calculations—and the suggestion from MIT that their wages be considered a “minimum subsistence wage”—we use 300% of the federal poverty line as the threshold for family-sustaining wage to ensure our calculations reflect a minimum living wage standard regardless of family structure.

Detailed data on family income is from the U.S. Census Bureau’s American Community Survey (ACS). This annual survey of demographic, economic, and social characteristics has been collected for all households and group quarters populations since 2006. The Public Use Microdata Series (PUMS) contains anonymized person-level observations that enable custom tabulations of the data for the state and some counties. Data for all counties is available in the 5-Year ACS in Table B17024: Age by Ratio of Income to Poverty Level in the Past 12 Months.

All residents of North Carolina ages 35-44 for whom the poverty rate can be calculated.

The Census Bureau excludes certain groups from poverty calculations, such as residents of college dormitories or military barracks. Full details on the poverty universe are available here.

Certain types of group quarters facilities are not sampled in the ACS due to difficulties associated with data collection, such as domestic violence shelters, soup kitchens, and living quarters for victims of natural disasters. Full details on the ACS sample and methodology are available here.

About: This tool displays information on the services rendered, participants served, and outcomes achieved through the state’s Workforce Development Boards.

About: Developed by the NC Department of Commerce, this tool tracks the tightness of the state’s labor market and view estimates of the number of jobseekers and job openings.

How does a family-living wage differ from the minimum wage?

From MIT Living Wage calculator: “The state minimum wage is the same for all individuals, regardless of how many dependents they may have.” In contrast, the living wage is the hourly rate “an individual in a household must earn to support his or herself and their family.”

How much money does it take to earn above 300% of the federal poverty line?